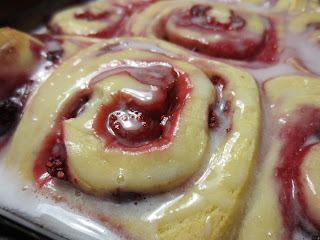 Okay, this is the best new recipe I've tried in awhile!  The original recipe is from Sally's Baking Addiction. Her pictures are beautiful so you should take a look! The recipe included below is pretty much the same as found there except I added a little flour and raspberries, and put some of my own baking advice in the instructions.

We're trying to lose weight around here so we only get to eat this kind of deliciousness on the weekend...but man was it worth the wait!!  They were also surprisingly easy to make!  The dough is similar to a traditional cinnamon roll recipe. (You can try my cinnamon roll recipe here) and the filling was simply raspberries tossed with cornstarch and sugar.  But the finished result will make people think you went to a lot more effort :)  We had them warm after dinner and they were great heated up the next day too.  They'd be perfect for a special breakfast or a brunch type baby/wedding shower!  So if I bring them to the next one try and act surprised!

Glaze:
1 cup confectioner's sugar
3 T. milk (she suggests using heavy cream but I used skim milk and it came out just as delicious)

In a small saucepan heat milk to lukewarm.  (If milk begins to boil, turn off immediately and allow to cool before adding yeast.  In a kitchen aide (or the like) combine warm milk, sugar and yeast and allow yeast to bloom until frothy (about 5-10 min). Add softened butter, eggs and salt and mix on low for 2-3 minutes or until well combined.  Using your dough hook attachment, slowly beat in flour 1 cup at a time until soft dough forms.  Increase speed to medium and beat for 10 minutes until dough is soft and slightly elastic.

Remove dough from mixer and knead with hands for 2-3 minutes until elastic.  Place dough in a slightly greased bowl and cover.  Allow to rise until doubled (1-2 hours).  (I put mine on the counter and boil water in a pan next to it since New Mexico isn't known for it's humidity.)

Grease a 9x13 pan well and set aside.  On a lightly floured surface, roll the dough into a 10x24 in. rectangle.  Toss frozen raspberries in sugar and cornstarch and spread evenly across the dough. Roll dough tightly to form a 24 in. log.  Using a serrated bread knife cut the log into 16 sweet rolls (about 1 1/2 in. thick)

Place rolls in 9x13 pan and allow to rise until doubled (another 1-2) hours.  The raspberries will release some of their juice in the bottom of the pan.

Preheat oven to 400 degrees.  Cover rolls with foil and bake 15 minutes.  Remove foil and continue baking for 10 more minutes or until rolls are golden brown.  While rolls are cooling, mix together glaze ingredients.  Pour glaze evenly over warm rolls and enjoy! 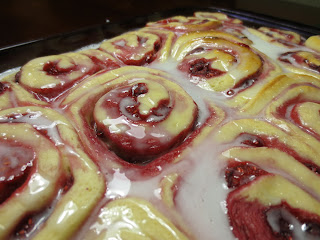 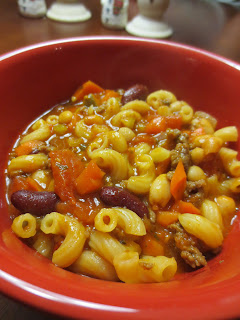 Well, apparently it's almost February now and the last picture on my blog is of pilgrim hats, so I guess it's been a while!  But I promise this is an extra tasty recipe to make up for my absence!

I made this soup back in December when I had all of my family visiting!  It was a big hit among kids and grown-ups alike!  I came across it in a church cookbook my Mom gave me a few years ago.  The recipe is from her friend Kay so I knew that it would be delicious!  It's very quick to make and super hearty.  Throw in some bread sticks and you've got a full meal.  Give it a try!

Brown beef and onion in olive oil until beef is cooked through.  Add the garlic and continue cooking for 1 min.  Add all remaining ingredients and bring to a boil. Turn heat to medium-low and simmer until pasta is done and vegetables are tender.  Enjoy!

Freezer meal instructions:
Cook beef.  Combine beef with all other ingredients except for beef stock.  In place of the stock add 4 teaspoons beef bouillion. Freeze.

When ready to cook, add soup mix and 4 cups of water to the crock pot and cook on low for 6-7 hours or until soup is heated through and veggies are tender.