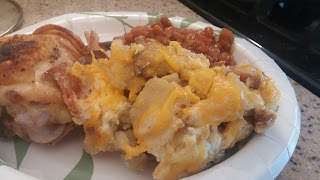 Well, the rain has finally subsided and the sun is out in full force which means it's HOT!  I'm typing this up at 9am and it's already 76 degrees inside my house!  We don't have air conditioning so in the summer months I try and use my oven as little as possible...which means it's now officially BBQ and Dutch oven season at our house! While the heat is not my favorite I do love cooking outside. So you have to look on the bright side :)

I had to take this picture on the fly at a party so it doesn't adequately capture the deliciousness of this recipe. BUT believe me when I tell you that they are amazing!  Alex and I made this together which gave them an extra shot of awesome! I'm not trying to brag...I'm just saying we make good things together...just look at our kiddos!

Anyway, I had been looking for a dutch oven potato recipe for a while but after being disappointed with a few I decided it was time to take matters into my own hands.   A lot of recipes like this call for cream of chicken soup, or cream of mushroom, etc.  I don't use those that much these days so I decided to make my own sauce to add.  When you're camping I could totally see the ease of using a can of cream of whatever, but if you're home and feel like taking it to the next level give this a try!

These are a great side to any potluck or party too.  It makes a big batch and stays nice and warm in your dutch oven.  They are pictured above with the amazing Bullock family's baked beans and dutch oven chicken. YUM!

Heat charcoal using whatever method you prefer.  We have a small charcoal chimney (bucket with a side handle and small holes around the bottom) that we bought at smiths (probably about 10 bucks) that helps get them hot fast.  It is so worth getting one, especially up here where it's always windy.

Once your charcoal are heated place 12 briquettes under your dutch oven.  Give the oven about 5 minutes (without the lid) to heat up.  Once the dutch oven is hot throw 3-4 pieces of the bacon in there.  While bacon is cooking break it up into smaller pieces.  Once bacon is cooked completely, add the garlic powder, onion powder and salt and pepper.  Make sure the bottom is completely coated in the seasoned grease.

Add sliced potatoes and olive oil.  Give them a good stir so that they are gently coated in the bacon mixture.  Cover oven with lid and top with remaining briquettes.  At this point you can also move 4 or 5 of the briquettes from the bottom to the top.  Having more of the heat on the top will keep the bottom from burning.

Bake potatoes in dutch oven for about 30 minutes.  Meanwhile, cook the rest of your bacon in a frying pan until nice and crispy. Crumble bacon.

Give the potatoes a stir and check how they are doing. Cook for another 15-25 minutes depending on softness.  Don't overcook them or you'll end up with potato mush when you mix in the next ingredients.  Tender but not soggy is perfect! Meanwhile, In a separate pan mix cream, water, flour, and chicken bouillion together.  Heat over medium heat until mixture begins to boil.  Stir constantly until mixture thickens into a roux.  Remove from heat.

When potatoes are done to your liking, Add  bacon, cream mixture, and 1 cup of cheese.  Stir slightly until well incorporated.  Some of the potatoes will break up and that's okay.  Top with remaining cup of cheese.  Replace the lid and let sit for about 5 minutes or until heated through and cheese melts.  Enjoy!