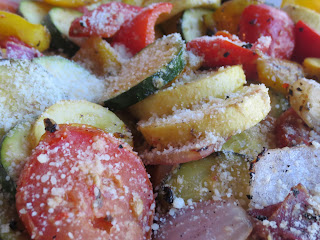 Last night we had a Tucanos inspired dinner with grilled chicken, grilled pineapple and these yummy parmesan veggies.  Quick and easy and super healthy! I made them in a grill basket but might try them on skewers next time to keep them crispier while cooking.  My 2 year olds both gobbled them up! And so did I :)

Cut veggies.  Marinade veggies in Italian dressing for 1 hour.  Placed veggies in grill basket or on skewers.  Sprinkle with 1/2 of the parmesan.  Grill on high for 10-15 minutes turning often.  Sprinkle veggies with the other 1/2 of parmesan and continue cooking for 5-10 minutes or until veggies are cooked through and slightly blackened. Enjoy! 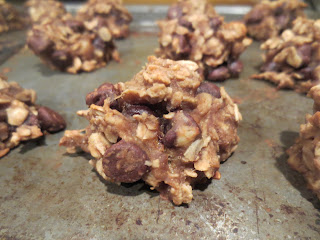 A few days ago my 4 year old wanted to make cookies.  My husband and I have been trying to lose some weight so I turned to the internet to see what I could find. We came up with these little guys.  No flour, eggs or oil. Sweetened by mashed bananas and cinnamon with just a taste of chocolate! My kids loved them for dessert and the next morning for breakfast ;) This recipe makes about 20 and they only have 63 calories each. Enjoy!

Mix all ingredients together until well combined.  Drop by spoonfuls onto a greased baking sheet.  Bake at 350 degrees for 15 minutes. 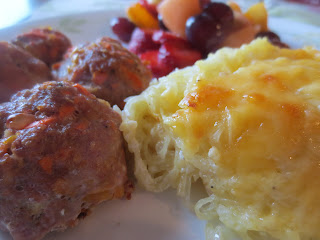 Every once in awhile a recipe comes along that is so awesome I have to blog about it within an hour of eating it! I'm that excited to share it! :) Alex and I have been trying to eat better and get in better shape for my sister's upcoming wedding.  I've been playing around with new foods like ground turkey, spaghetti squash, quinoa, almond milk, greek yogurt and so forth.  For the most part I've been cooking for the kids like usual and just subbing in healthier ingredients for myself.  But I've also been trying to introduce them to a new "healthier" food each day.  Today they got a double dose because I made my friend Jenny's turkey and veggie meatballs (what's on your menu) and I made a new spaghetti squash recipe.

I kept calling the squash cheesy potatoes for the sake of my 4 year old.  But finally half way through dinner my 6 year old very matter-of-factly said to me "mom, these are not potatoes, they don't taste like potatoes, they don't even look at all like potatoes".  Which made my husband laugh and was pretty funny! But while they don't "even look like potatoes" that didn't mean it wasn't fantastic!  And while with cheese and sour cream it's not exactly "health food", I used an online calorie estimator (myfitnesspal) and this recipe comes in at 168 calories per serving instead of 380 for the same size serving of potatoes au gratin.  So give it a try!

Cut spaghetti squash in half and scoop out seeds.  Pierce all over with fork.  Lightly brush cut side with olive oil and sprinkle with salt and pepper.  Place both halves of squash, rind side up on a large baking sheet and cover with foil (tenting slightly).  Bake at 400 degrees for 30-40 min. or until squash is tender. Turn squash back over and scrape out squash with a fork.

When squash is about 5 minutes from being done start cooking onions.  In a small sauce pan, saute onion, garlic, oregano and red pepper flakes in butter until onions are soft.   Combine onion mixture, cooked squash, sour cream and 1/2 cup of cheddar cheese in a 8x8 baking dish.  Top with remaining 1/4 cup of cheese and bake for 20 min.  When casserole is hot and bubbly, turn oven to hi broil for 1-2 minutes to get the cheese nice and toasted on top.  Enjoy!