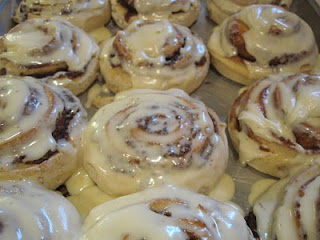 This week I pulled myself together enough to make 8 dozen cinnamon rolls for my friend's daughter's wedding reception! It was a great night with lots of yummy food and I'm glad that I could help out with something since I've been kind of useless lately. If you've ever wondered what 6 dozen cinnamon rolls looks like here is a picture of them rolled out before I baked them: 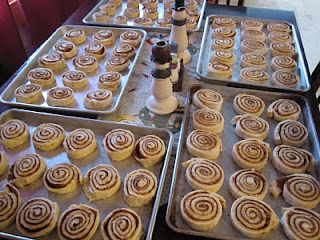 Anyway, this has been my favorite recipe for cinnamon rolls! It is supposed to taste like Cinnabon and it comes pretty close when they're warm. Hope you enjoy!

Warm milk to 110 degrees. Add yeast and stir until dissolved. Add all remaining dough ingredients except flour. Slowly add flour while stirring. Let set until doubled. In separate bowl mix brown sugar and cinnamon together. Roll dough into 16x21 in. rectangle and spread with 1/3 cup softened butter. Sprinkle evenly with cinnamon mix. Roll dough into long tube and cut* into 15 rolls (about 1 1/2 in. thick). Place rolls on a cookie sheet. Cover and let rise until double. Bake at 400 degrees for 15-20 minutes or until golden brown. While rolls are baking, cream together the cream cheese and butter for the icing. Slowly beat in the powdered sugar. Add vanilla and salt and beat until creamy. Let rolls cool 2 minutes and then spread with frosting while still hot!

* A great trick I learned to cut cinnamon rolls is to use dental floss. Simply pull floss underneath the dough and wrap it up and around. As you pull it tight it cuts the dough from all directions at once (so it doesn't smoosh) and it helps to un-stick the dough from the counter so that you rolls stay in a nice circle shape!
Posted by Julia at 12:08 PM 5 comments:

Sorry for the long break...

Hello? Is anyone still reading? :-) Sorry I seemed to drop off the earth there for a bit. As many have heard or deduced for themselves...I am in fact 12 weeks pregnant! While I am so excited to be pregnant again after going through a miscarriage this summer...I have been really sick this time and so I haven't been cooking. And even when I do cook I haven't felt like writing about it...you know how that goes!

Anyway, we have still been doing some fun things around the house for the season and I've tried to keep taking pictures so that I can do posts about them all eventually! Today I'm feeling better so I decided to post some of them. Thanks for you support and hopefully we'll get back up and running on a normal schedule here at Neighbor Julia soon! We'll be at my sister's wedding next week and there will be plenty of festive foods and activities to post about soon! For now, enjoy the sudden bursts of posts from random things that have happened over the last month!
Posted by Julia at 12:00 PM 2 comments: 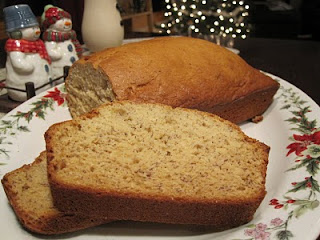 This is the banana bread I was raised on! I loved when my mom would make this because it not only tastes delicious...it makes the house smell awesome! I like that it's comes out really solid and moist and not super crumbly...probably all the sugar holds it together :-) Anyway, this was the first batch of the season and it was a great treat for today! Give it a try! 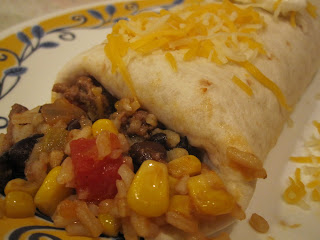 There are some that will tell you that just opening and mixing cans together is not really cooking! I am not one of those people...and this recipe will prove it! This is one of those recipes that was created on a Sunday afternoon when I needed to feed a big group of people and I hadn't been to the store for a while and VOILA! It now gets made frequently in our house because it's fast, the kids eat it well, and we always have the ingredients on hand! This makes a big pan-full so you can feed a big group or it reheats great for lunch the next day! If you have had a long day but still want something yummy this might be just what you need. I don't know if I've just lived in the southwest too long now or what but a warm flour tortilla is like the best comfort food ever!

Beef and Rice Burritos
1 lb. ground beef
2 cups cooked rice
1 taco seasoning packet (sometimes I only use 1/2...just depends on my mood)
1 cup salsa (I use a chunky type salsa so it adds onion and bell pepper pieces to the mix!)
1 can corn (drained)
1 can tomato with green chilies (I use Rotel) (drained)
1 can black beans (drained)
shredded cheddar cheese (to top)
sour cream (to top)
tortillas

In a large skillet or electric frying pan cook beef and drain. While beef is cooking, prepare rice according to package directions. Add cooked rice to beef. Add taco seasoning, salsa, corn, Rotel, and black beans. Mix thoroughly and cook until heated. Warm tortillas in the microwave so that they will roll easier. Put beef and rice mixture in tortillas along with shredded cheese and sour cream and wrap into burritos. Enjoy!
Posted by Julia at 2:40 PM 2 comments: 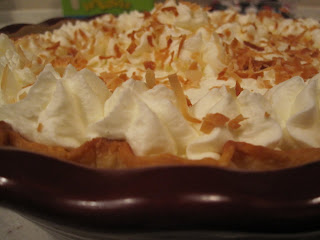 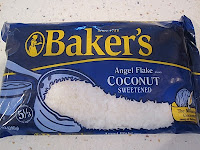 I choose to be a brand snob about! Especially in recipes where I'm going to be baking with the coconut I think it's important! I think that Baker's makes the best sweetened coconut. It is super moist (way more than the cheaper brands) and really made a huge difference in the way the pie and pudding held together! Anyway, that's just my opinion...sometimes you have to splurge!
Posted by Julia at 8:43 PM 1 comment: