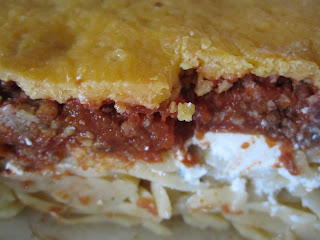 This is one of Alex's favorite meals. We have it every Valentine's day and it is pretty delicious. It's super dense and filling too though...so be prepared to have a ton of leftovers! It's kind of the same layering idea as lasagna. I would say that it's easier to make than Lasagna but uses just as many dishes to make it :)

My kids love this pasta too. It might just be because I serve it with asparagus...and given the choice between pasta and asparagus they go with the pasta! At any rate they gobble this up!

Drain pasta and place in the bottom of a 9x13 in. baking dish. Cover pasta with cream cheese mixture and then meat sauce. Bake at 400 degrees for 35 min. or until heated through. Top with cheddar and bake an additional 5 minutes. Let set for 5 minutes before serving.
Posted by Julia at 8:39 AM No comments: 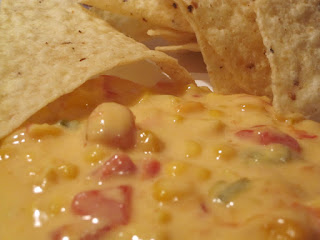 Have you ever looked at the picture for a recipe and thought it was going to be delicious but then when you read the ingredients it was totally different than you thought? So I saw a recipe for corn dip in a magazine and cut it out with the intent to use it. But I was just going off the picture. By looking at the picture I assumed it had tomatoes and cheese in it. But then I realized it was really pimentos and barely any cheese. So then I decided that I would just make up a recipe that I thought encompassed the flavor I was imagining the picture to have :) So here's what I came up with! It's basically how I make queso and then I added some corn. Quick and easy! Enjoy!

Cheesy Corn Dip
1 can tomatoes with diced green chilies (do not drain) -I use Rotel
1 (16 oz.) brick of Velveeta (diced into 1 in. cubes)
1 can sweet corn with red and green bell peppers (drained)
1/4 cup flour

Cut up cheese and place in large saucepan. Add the whole can of tomatoes and chilies (do not drain). Melt cheese over medium heat until totally blended with tomatoes and chilies. Drain corn and add to the cheese mixture. Add flour and whisk into dip until smooth. Allow to thicken. Serve warm with tortilla chips. (I kept mine in a crockpot on warm for the entire party so that it didn't get to thick)
Posted by Julia at 11:37 AM No comments: 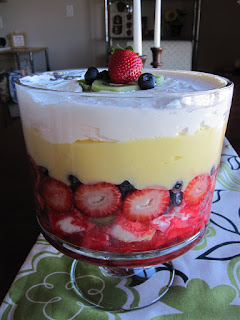 Prepare vanilla pudding according to package directions and refrigerate until set. Meanwhile, chop up angel food cake and fruits. Place chopped cake in the bottom of trifle bowl. Combine raspberry jello with 1 cup boiling water. Allow to cool slightly and pour half over cake. Arrange fruits on top of cake (reserving a few pieces for garnish). Pour the other half of the jello mixture over the fruit. Cover with prepared pudding and top with whipped cream. Arrange a few pieces of fruit on top as desired. Refrigerate at least 1 hour to let jello chill. Keep refrigerated until ready to serve.
Posted by Julia at 12:14 PM No comments: 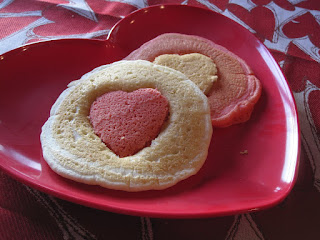 Happy Valentine's Day! I got this idea from pinterest. They had a big fancy recipe involving red velvet and buttermilk pancakes. I cheated and used food coloring. I'll explain that later. But first...a quick rant...what is the deal with red velvet? It's in like everything! Pancakes, cheesecake, muffins, cookies, etc. I'm just not a big red velvet fan and they keep tainting otherwise delicious things with it. Why now? Why the sudden craze? ...and we're back!

So, back to the recipe at hand. You can use any pancake recipe you want. I've included a recipe here since this is a recipe blog and all. Just divide the batter in half, dye one of the halves another color and then mix and match the hearts.

I loved this idea! Now I don't have to spend a bunch of time making pancakes into shapes. Just make regular circle pancakes using your favorite recipe and then cut the shape out that you want. Think of all the holidays you can cover using the same method :) Snowmen, easter bunny, turkeys, whatever! For birthdays you could cut out the child's age. So easy! Just promise that you will use this new found power for good!

To make heart pancakes: Divide batter in half and dye one of the halves your desired color. Cook pancakes over medium heat. Make sure to cook pancakes slowly so that they don't brown too much. Once pancakes are done cooking cut out hearts using a heart shaped cookie cutter. Mix and match colors to get the desired effect.
Posted by Julia at 5:09 PM No comments: 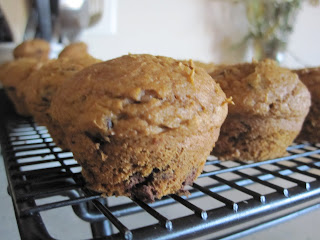 My sister gave me this recipe many years ago. It started out as a weight-watchers recipe but then I added chocolate chips so...you know... Anyway, they have 3 ingredients and are super easy! They are also very dense and moist. The pumpkin makes them much more filling than normal mini-muffins. I heard a funny joke about mini-muffins and how it's easy to just eat one or twelve. So true! Hopefully I'm not the only one who can accidently eat like 10 mini-muffins before I even notice whats going on.

Anyway, I made these for a church function a while back and forgot to post about it. Better late than never...

Mix all ingredients together until moistened and smooth. Fill mini-muffin pan with batter. Bake at 350 degrees. For timing use the cupcake directions on the back of the cake mix. Yields between 3-4 dozen muffins. Enjoy!
Posted by Julia at 8:20 AM 1 comment: 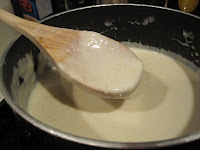