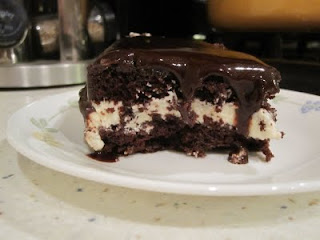 So this isn't the greatest picture ever...maybe I was just in a rush to eat some cake! :-) I found this recipe in an old Taste of Home recipe book. The little recipe books at the check out in the grocery store are my weakness! Anyway, it's a fun twist to a plain chocolate cake and has even replaced the triple chocolate bundt cake as Alex's favorite. Those who know about him and his love affair with the bundt cake know that is a big deal! My friend compared it to a homemade hostess cupcake...which is a pretty good description. It's a little involved to make but uses only basic baking ingredients which is nice. It's for sure worth the extra effort!

Prepare cake according to package directions, making sure to grease and flour the 9x13 pan well so that cake can be removed easily. Cool 10 minutes and invert onto wire cooling rack. Cool completely.

To start the filling: cream butter, shortening and sugar in a large bowl until fluffy. In a small pan heat milk to 140 and then cool for 2 minutes. (Just FYI, I tried making it once without heating the milk to see how important it was and the cream eventually worked out but it took much longer to whip than when it was heated. So it's worth it to heat the milk) Gradually add heated milk to creamed mixture. Beat until sugar is dissolved. Stir in vanilla.

For glaze, combine sugar, cocoa and starch in a large saucepan. Slowly add water. Bring to a boil and cook until thickened (about 3-5 minutes). Remove from heat and stir in butter and vanilla until smooth. Cool to lukewarm. Spread over top of the cake. Let stand until set. Refrigerate leftovers. (Alex and I both think this cake is better when it's been in the fridge overnight so it's a great make-ahead dessert) Enjoy and try not to eat the whole thing! :-)
Posted by Julia at 1:25 PM