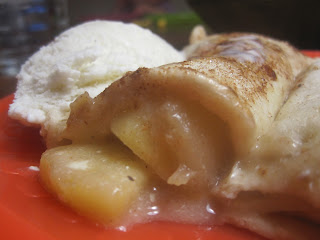 I had seen a few pictures of these on facebook and pinterest and decided to give them a whirl!  I just kind of made up a recipe using my normal apple pie filling and here's what I came up with! It ended up making a 9x13 pan but you could definitely cut it in half and make an 8x8.  They are huge and we each only ate half of an enchilada (with some vanilla ice cream of course!) so there was a ton of leftovers. Give them a try!

In a large bowl mix apples and lemon juice and set aside.  In a large stock pot or dutch oven combine 3/4 cup sugar, cornstarch, cinnamon, salt and nutmeg.  Add water and whisk together.  Cook over medium- high heat until thickened (about 2 minutes of boiling).  Melt in cream cheese.  Add apples and cover.  Simmer over medium heat until apples are tender.  Pour 1/6 of mixture into a tortilla and roll.  Continue with each of the tortillas placing each one in a 9x13 pan. Brush tops of enchiladas with butter and sprinkle with cinnamon and sugar.

Bake at 350 degrees for 15-20 minutes or until heated through and tortillas are slightly crispy. Serve with vanilla ice cream.