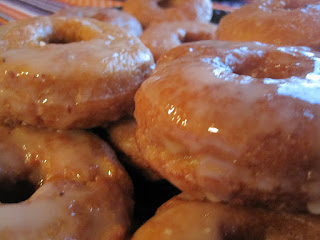 This original post was from just a few months after the babies were born.  It was a crazy time of life and I think that's reflected in what I wrote! So as a special bonus I'm going to let you read the original intro in addition to the recipe. Here you go:

Sometimes since the twins were born, it seems like I have a daily fight with myself about whether or not I should have a donut. The fact that I rarely get a shower usually prevents me from going and getting one. So, today as I sat here feeding two babies and craving a donut, I got this idea that I could make myself a donut! Then I thought why in the world would someone with such horrible self control learn to make donuts. This can't possibly end well. But then I remembered I owed it to my blog readers to come up with new delicious recipes. And if I have to sacrifice and eat a donut or two then that is what I'll have to do. So you're welcome. All 5 of you!

I found this recipe on foodnetwork.com. It's from the Neely's who are a husband and wife cooking team that have their own television show. I saw them on another talk show once and they were hilarious.

These actually proved to be quite delicious. Fried dough tends to do that. They aren't, however, your typical light and fluffy donuts. They are pretty dense, much like an old fashioned glazed would be. For all of this small town's faults...we actually have a pretty delicious donut shop down the road from us. My family's favorites are the old fashioned applesauce donuts. These are very similar to that. In fact, if you substituted applesauce for the pumpkin puree and ditched the maple extract in the glaze...I'm pretty sure you'd end up with an awesome applesauce donut.

These were really easy to make but a little time consuming to fry them all up and dip them all in the glaze. Probably a weekend recipe in my opinion. Enjoy! 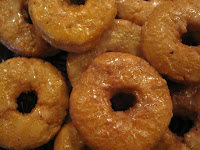 Preheat oil in a large Dutch oven to 375 degrees. Whisk dry ingredients in a large bowl. In another large bowl, whisk eggs, yolk, buttermilk, pumpkin, melted butter and almond extract until smooth. Add the wet ingredients to the dry and mix thoroughly with a wooden spoon. The dough will be sticky.

Dust countertop and fingers with flour. Using your hands pat out dough to 1/2 in. thickness. Using a 3 in. cutter, cut out donuts. Use a 3/4 in. cutter for the donut holes. Gather scraps and re-roll. Continue cutting out donuts until all dough is used.

Fry donuts, in hot oil, until golden brown and crisp, about 1 min. per side. (as you repeat the process it seems to take less and less time to cook them through) Drain on wire rack over cookie sheet to cool. Once cool dip tops in maple glaze. Makes about 24 donuts.
Posted by Julia at 6:05 PM