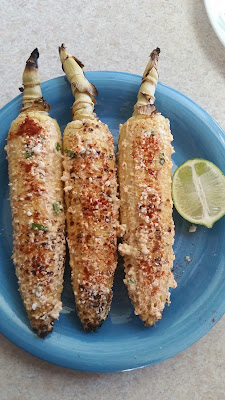 So I've never actually had Mexican street corn before but it's all over pinterest these day and so I decided to give it a whirl.  I've seen tons of different recipes for mexican street corn salad, steak, kabobs, etc. etc. etc.  So I decided to just try a straight up corn on the cob recipe and boy did it pay off. Not only is it delicious it looks fantastic in pictures! No wonder the internet is obsessed.  It's a food bloggers favorite kind of recipe!

For as much as it was all over the internet, no two recipes were alike so I just borrowed what I like from each of them and made my own up. I liked that a lot of the spice comes from topping it with chile powder at the end so my kids were able to adjust the heat to their own preferences.  And it was a nice change from just drowning the corn in butter.  Test it out for yourself!

After removing husks from corn, place corn on a preheated grill and cook for about 8 min. over medium heat.  Then flip and cook another 9 minutes or until corn is soft but not dried out.  It's okay if some of the corn chars up a bit.

Meanwhile, combine all remaining ingredients in a small bowl and set aside.

When corn is done- remove from grill and brush each piece all over with sour cream/cheese mixture. Sprinkle with extra cotija cheese and chili powder.  Eat warm! 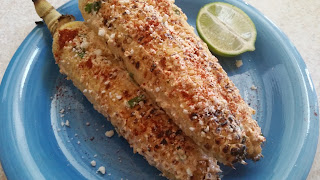