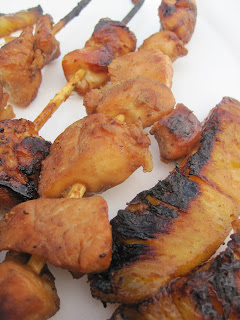 So here's the story: Last week I went to Tucanos for the first time and now I'm obsessed with grilled pineapple!  I vowed upon leaving that I would learn how to make it (as well as the grilled parmesan veggies, YUM!)  Then, my neighbors put together a potluck block party and I decided to give grilled pineapple a try.

Also, interesting side note: do you know what the outside of a pineapple is called?  When I started typing up the instructions for this recipe I realized that I didn't.  Skin? Husk? Rind? Peel? So I decided to look it up and I found out that the internet didn't know either!  It's called all of those things by one source or another.  One website even said it was called "the eyes". And Wikipedia didn't even address it.  So I still don't know the answer...give me your opinion!

Usually when I grill pineapple I do it in rings but I wanted the pineapple to go farther so I decided to cut it in spears.  And I have to say I really preferred the pineapple that way for grilling.  It cut up faster and I didn't seem to lose as much juice cutting it up that way.  Then I rolled each piece in a little bit of cinnamon and brown sugar.

I decided to serve it with chicken kabobs using a teriyaki sauce recipe from my "our best bites" cookbook.  I think the two went together great!  So I'll post both recipes here.  Give them a try together or seperately!

Slice pineapple into fourths remove the core and the husk/rind/skin.  Cut fourths into long spears (about 1 in. in width).  Mix the brown sugar and cinnamon together in a large bowl.  Roll each of the spears in the cinnamon mixture, lightly dusting all the pineapple.  This helps draw out the juice and causes instant carmelization when you put it on the grill.

Place spears directly on grill.  Cook about 4 minutes on each side or until pineapple is warmed through and juicy with lightly browned edges.

Teriyaki Chicken Kabobs (Using "Our Best Bites" sauce recipe)
Kabobs:
3 or 4 large chicken breasts (chopped into 1 in. cubes)
10 wooden skewers (about 12 in. in length)
warm water to soak skewers in

Fill a 9x13 pan half way with warm water.  Soak wooden skewers in the warm water for 20 min. while you make the sauce.

For the sauce, combine sugar, soy sauce, vinegar, garlic, ginger and pepper in a small saucepan. Cook over medium heat until boiling.  In a small container, whisk together the cornstarch and water.  Add the cornstarch mixture to the boiling soy sauce mixture and continue to cook until thickened.  Remove  from heat and allow to cool slightly.

Cut uncooked chicken into 1 in. cubes. Remove skewers from water and dump out water from the pan.  Place chicken pieces on the skewer one at a time making sure to leave a little space between each piece so that they can cook evenly.  When all of your chicken is on the skewers.  Place the kabobs in a shallow dish (I used the 9x13 pan from step 1) and pour Teriyaki sauce over them (reserving 1/2 cup for basting on the grill).  Turn each kabob once to make sure they are fully coated.  Let marinate for about 4 hours (longer is fine too).

Grill kabobs for about 10 minutes on each side, basting periodically with the reserved Teriyaki sauce.  When chicken is cooked, remove from the grill, and enjoy!