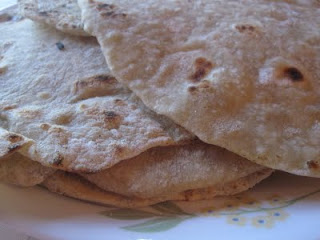 Well I wanted to have fish tacos but Alex isn't a huge fan of fish. So I decided to jazz it up a bit by making homemade tortillas. I found a recipe for them in one of my Taste of Home magazines and away we went!

They were really soft and chewy but they took a LONG time to make. The recipe said they would take about 30 min. start to finish which was about right. And 30 minutes wouldn't be too bad for dinner making except we were eating more than just tortillas! Definitely not something I would do every time I needed a tortilla but it did make the tacos even yummier! Also, it's nice to know that I have all the ingredients in my pantry if I were ever in need of a tortilla and there were none in the fridge :-) You know...a tortilla emergency!

But actually it is a nice thing for food storage. I try to keep a 3 month supply of meals on hand and tortillas are definitely featured in my menu. So by using 4 food storage items I could make my own. Plus the recipe said that they will keep in the freezer for up to a month!

I think these would be especially yummy as part of a mock Cafe Rio salad. So I might try them again next time I make Cafe Rio Pork. Anyway, hope you enjoy! 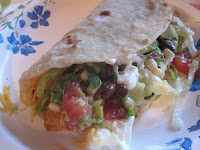 Stir all ingredients (except the cooking spray) in a large bowl. Turn dough onto floured surface and kneed 5 to 6 times. (The dough was really sticky...so like I said before I used a lot more flour while kneading and rolling the tortillas). Divide dough into 8 balls (apx. 1 1/2 inches round). On a well floured surface roll balls into 7 in. tortillas.

Coat frying pan with cooking spray and cook tortillas about 1 min. on each side or until slightly browned. (Just another side note...I found that cooking these were a lot like making pancakes...they seemed to cook better as I went and took less time as the skillet got to the right temperature). Keep tortillas warm until ready to serve! Enjoy!
Posted by Julia at 9:13 AM