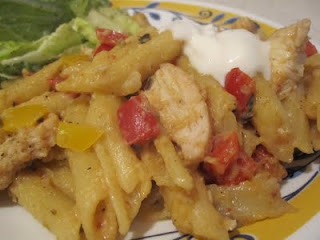 I bought some chipotle seasoning from Pampered Chef during my pregnancy and so now that I'm cooking again I've been itching to use it! But for what?

After much debating I decided to use some as a rub for grilled chicken. (I'm a little addicted to using the grill right now!) I hadn't used a lot of rubs so I was surprised to find out how easy it was and how great it made the chicken taste! But then the question became what can I use this delicious chicken for? And that's when I remembered the southwestern pasta that I used to get at Red Robin. So I decided to recreate it the best I could from memory. I was a little nervous making up my own recipe since I was feeding more than just my family but luckily it turned out yummy! I mean with chicken, pasta, and veggies how wrong can you go really?

Just a quick note...since I was making this for a larger group of people the recipe makes a large pot full. It can be easily halved and still probably be enough to feed a family! Give it a try!

Wash chicken and dry thoroughly. Brush with 1 T. olive oil and sprinkle with chipotle rub mix. Grill until fully cooked through. Slice and set aside.

Begin cooking pasta in a large pot of boiling water.

Meanwhile, in another pot, saute bell peppers and onions in 2 T. olive oil until softened. Add Alfredo sauce, cooked penne and grilled chicken. Heat through. Mix in olives and tomato just before serving. Top with sour cream and tortilla strips if desired.
Posted by Julia at 8:47 PM