Halloween Cupcakes That Kids Can Decorate! 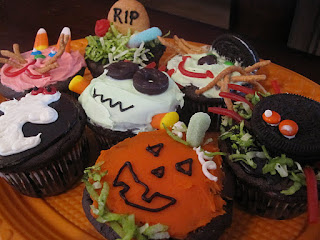 This post isn't so much a recipe as it is just ideas of cupcakes you and your kids can make together. My oldest had a really bad day at school a few weeks ago so I decided to have an un-birthday party for her. (Something my Dad used to do for us growing up). Anyway, she'd seen some halloween cupcakes in one of my magazines and been wanting to make some like it. So I went to the store and bought a bunch of toppings, baked some cupcakes and had it ready for her when she got home! The girls and I had a great time decorating these and it was really an easy activity to set up for the kids! 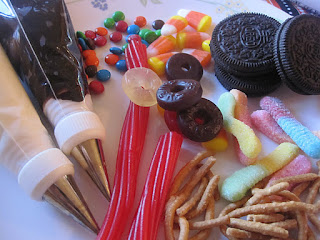 First step is to get some toppings. The picture above shows a lot of the things we used. Some good ideas are vanilla and chocolate icing, different colors of frosting, chow mein noodles, pull apart licorice, gummy lifesavers, gummy worms, nerds, mini m&m's, oreos, vanilla wafers, candy corn, colored coconut, etc etc etc! I got out the toppings ahead of time and made up a plate for each kid so they weren't ripping into all the packages. It kept things neat and prevented them from eating a ton of candy...because I only let them each have one plate of toppings. So they didn't eat a ton because they wanted to use it on their cupcakes! (A little trick I learned teaching school!) 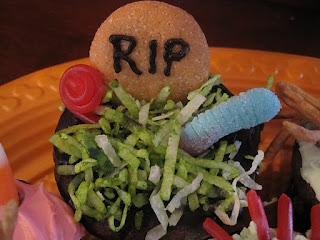 The first idea is a graveyard cupcake. It's made with chocolate frosting, flaked coconut tinted green, a sour gummy worm, pull apart licorice and a vanilla wafer. To tint the coconut place about 1/2 cup coconut in a plastic bag with 1 or 2 drops of food coloring. Close the bag and shake until coconut is completely dyed. 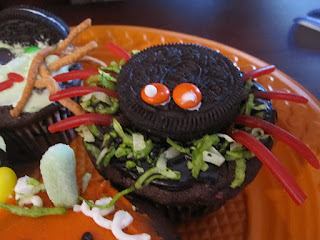 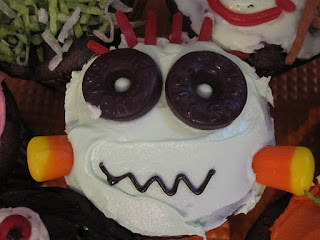 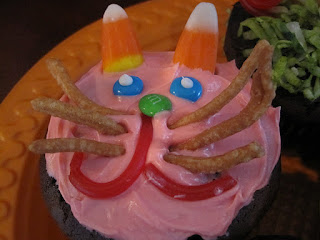 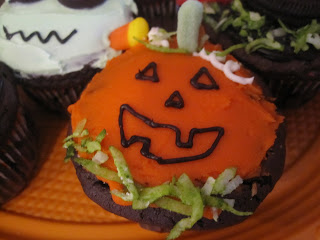 Pumpkin patch cupcake! For this one I used orange frosting, green coconut, chocolate icing and a green gummy worm cut in half. 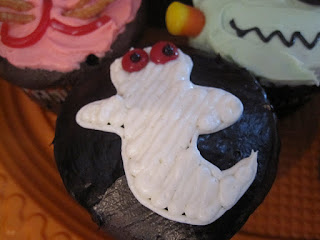 The ghost was easy! Chocolate and vanilla frosting with mini m&m eyes! 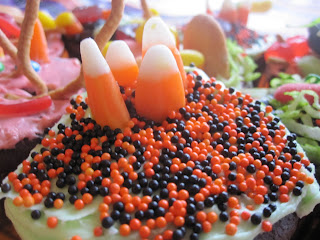 Don't be afraid of using too many sprinkles! The girls had a blast! (but I must admit I was sweeping these up for about 3 weeks afterward...Worth it!) 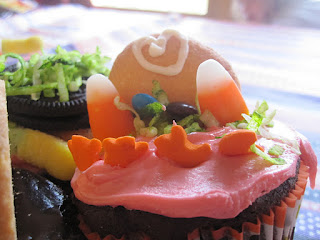 Here's my 5 year old's version of the graveyard cupcake. She had a great time trying to recreate the cupcakes that I decorated! My 2 year old on the other hand liked to freestyle decorate!
Posted by Julia at 9:50 PM