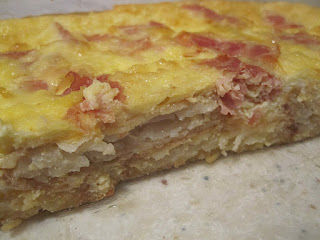 If you are a fan of ham and Swiss give this casserole a try! We've had it for breakfast, lunch or dinner! I even made it in bulk for a girls' camp that I helped cook at. It is great for company but also easy enough to make anytime.

I love quiche but my husband doesn't as much. I can usually talk him into one if I throw in some green chile but he also goes for this hash brown quiche! It's a quicker version of a quiche because instead of making a pie crust you line the pan with hash brown patties.

Breakfast foods taste great but sometimes it seems that I end up using every pan I own for one meal! This makes a great breakfast because you get all the good stuff (hashbrowns, eggs, and ham) all in one dish! This is very filling too so you can get quite a few servings out of one 9x13 pan. I usually serve it with some fruit or muffins.

Ham and Swiss Casserole (from the Essential Mormon Cookbook)
8 hash brown patties (most come in packs of 10 so I just break up the extras and throw them in too)
1/2 cup butter (melted)
1/2 lb. cooked ham (the recipe calls for cubed ham but I just rip up deli slices into small pieces)
1 cup shredded cheddar
1 cup shredded Swiss
8 eggs
2 cups cream (or milk)
1/2 tsp. salt

Place hash brown potato patties in greased 9x13 pan. Pour melted butter evenly over the potatoes. Bake at 350 degrees for 20 minutes. Remove from oven. Sprinkle potatoes with ham and cheeses. In a large bowl beat eggs. Add milk or cream and salt. Stir. Pour mixture over cheeses and ham. Bake at 350 for about 40 minutes or until eggs are set.
Posted by Julia at 8:22 PM