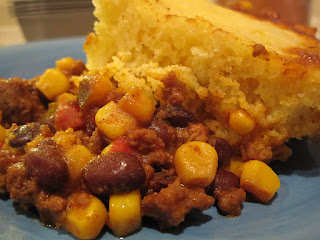 I love this recipe! I haven't seen my 2 year old eat so well ever. She has been asking all week if I will make it for dinner again. I thought it was delicious too but my favorite part was how easy it was to make and that it was made entirely from ingredients I usually have at home!

I've had recipes similar to this hundreds of times at church potlucks. You know you have too! Every time I do, I think I'm going to try and make it but I never follow through. So when I found this recipe in...you guessed it...Taste of Home, I decided it was time to give it a try! I'd baked things in a dutch oven before and I knew people baked in their slow cookers but I was worried it wasn't going to turn out. Now that I see something will actually bake in a crock-pot it opens up a whole new world of possibilities!

I really tried to be good this time and follow the recipe. But, when I put the batter on top it didn't look like very much cornbread and didn't even totally cover the meat mixture. So I decided to double it. It baked into a lot of cornbread. I was expecting it to bake upward but it kind of bakes down into the beans and meat. I also added some buttermilk since someone had told me that made cornbread extra fluffy! It really did! The last thing I changed was instead of buying a can of enchilada sauce, I made my own. I noted the recipe for that below as well. So I guess that's not too many changes...but maybe I should keep working on following directions.

I would say this recipe is the perfect amount for 4 people if 2 of those people are kids! :) Both of the girls did have seconds though! We had company for dinner and next time I would probably double the whole recipe to serve 6 people.

One last note is that it didn't take nearly as long as predicted to cook. Since you cook the meat beforehand, you are really just letting everything heat up which doesn't take 6-8 hours like they said. If you want to make it in the morning and leave it in there that long you can but if you want to do it in a shorter amount of time you could really cook the meat mixture on high for 1 hour and be good! The baking part at the end does take an hour on low! But, even doubling the cornbread it only took about 1 hour and 15 minutes to bake on low. So it's kind of nice that you can adjust the cook time to whatever you want!

Instructions:
In a large skillet, combine ground beef, salt, pepper, ground cumin, and chili powder. Cook until beef is no longer pink, drain. Transfer to a slow-cooker (at least 4 qt.) Stir in the beans, tomatoes, corn, enchilada sauce, green onions, and cilantro. Cover and cook on low for 6-8 hours (remember it really only takes about 2 hours on low to be heated and 1 hour on high).

In a medium bowl, combine muffin mix, eggs, and buttermilk. Spoon over meat mixture. Cover and cook 1 hour longer on low. Cornbread topping is ready when toothpick inserted near center comes out clean.

Sprinkle with cheese; cover and let stand for 5 minutes. Serve with sour cream and additional cilantro if desired.

Freezer Meal Cooking Instructions:
Place contents of ground beef filling bag in a large crock pot.  Place cheese and corn muffin mix bags out on counter so they can defrost while the meat mixture heats up in the crock pot. Cook meat on low for 6 hours or high for 3 hours or until filling is heated through. Stir well.

In a medium bowl, combine muffin mix, eggs and milk or buttermilk.  Spoon mixture into crock pot over meat.  Cover and cook 1 hour longer on low.  Cornbread topping is ready when toothpick inserted near center comes out clean.

Sprinkle with cheese and let stand 5 minutes until melted.  Serve with sour cream and additional cilantro if desired