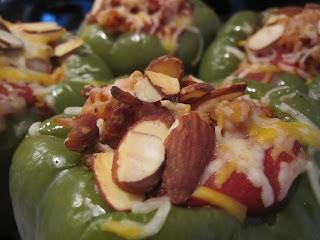 So I already had these on my menu for this week, but then in the last few days there's been stuffed bell peppers all over facebook and pinterest. Apparently they are enjoying their 15 minutes of fame! So allow me to throw this recipe into the ring as well.

My younger sister Christina is an awesome cook and this is her recipe. She is much fancier than me in her cooking so I was a little nervous to try it at first but they are incredibly easy! Fancy looking, incredibly easy to make, and kid friendly food wrapped in a vegetable :)

I've been making them for about 7 years now so I don't even measure out the ingredients too much anymore. It is really one of those recipes where you can change around the measurements to taste. Maybe you like it with more rice, or sauce, or meat. Go ahead! Also, the recipe below makes more filling than can fit in the bell peppers. We usually cut the peppers open after we bake them and put the extra filling on top. If you don't want extra then you could probably 1/2 the filling recipe and still have enough to fill the peppers. Or you can always add more peppers to fill.

I also usually top them with extra cheese after they've baked. The kiddos especially like the extra cheese. Veggies are always better with cheese. Anyway, basically what I'm saying is that this recipe is yummy but definitely open to changes. Just play around with it until you find what your family likes!

In a large pot boil enough water to fully submerge bell peppers. Cut a 2 in. hole in the top of each pepper. Remove the core and all the seeds from the peppers. 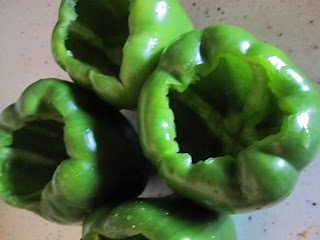 Add some salt and the peppers to the water and boil just until tender. Meanwhile, cook ground beef with Worchestershire in another large pot. Cook rice according to package directions. Add rice to cooked beef. Add diced tomatoes and 1 1/2 can of the tomato sauce (reserving the other 1/2 can for topping), dried onion and parsley. Cook together until heated through.

Stuff each pepper to the top with rice and beef mixture. Top each pepper with a dallop of reserved tomato sauce. Then top with cheese and sliced almonds. Bake at 350 for 15-20 minutes or until heated through and cheese is completely melted.

To eat...cut in half and top with extra filling and cheese if desired. 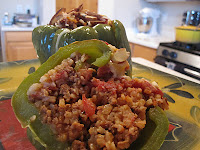